A data marketplace for the Bergisch city triangle

A data marketplace for the Bergisch city triangle

Digital maps for the traffic control of tomorrow

A data marketplace for the Bergisch city triangle to build up-to-date, digital maps that can be used for example in the field of AI-based traffic control – this is the project that the Chair of Technologies and Management of Digital Transformation at the University of Wuppertal and the cities of Wuppertal, Solingen and Remscheid are working on. But what purpose will this project serve? What data will be processed for this purpose and what benefits does such a data marketplace offer the cities and ultimately also the citizens?

Marketplaces have existed in the Bergisch city triangle for centuries. Their tried and tested concept is simple: by definition, it is a place where tangible or intangible goods are exchanged or sold. The University of Wuppertal and the cities of Wuppertal, Solingen and Remscheid have now adapted the principle of barter to their own requirements, made it future-proof and transferred it to the virtual world. Each city offers its traffic data and can use that of the other cities in exchange. The goal: the three cities supply each other with data and thus join forces digitally for the realisation of new traffic models. 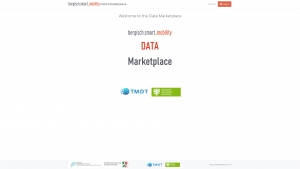 What data ends up in the marketplace?

The data marketplace was initially filled with static geodata from the respective city departments. In the future, data from traffic lights and infrastructure sensors as well as sensor information from modern vehicles will also enrich the online platform. Another long-term goal is the involvement of citizens. They are to be given the opportunity to actively participate and to both add and view data on the online platform.

The ongoing digitalization is transforming cities into future-proof, connected smart cities that are producing ever greater volumes of data. This heterogeneous data needs to be combined into a municipal data treasure. This can be put to good use to develop innovative new transport models and thus benefit cities and their citizens. One example of the use of the first full version of the data platform is the hackathon “Hack 4 Smart Cycling”, whose participants developed new ideas for cycling apps in the region with the help of the data marketplace. 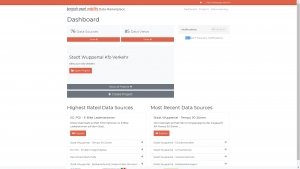